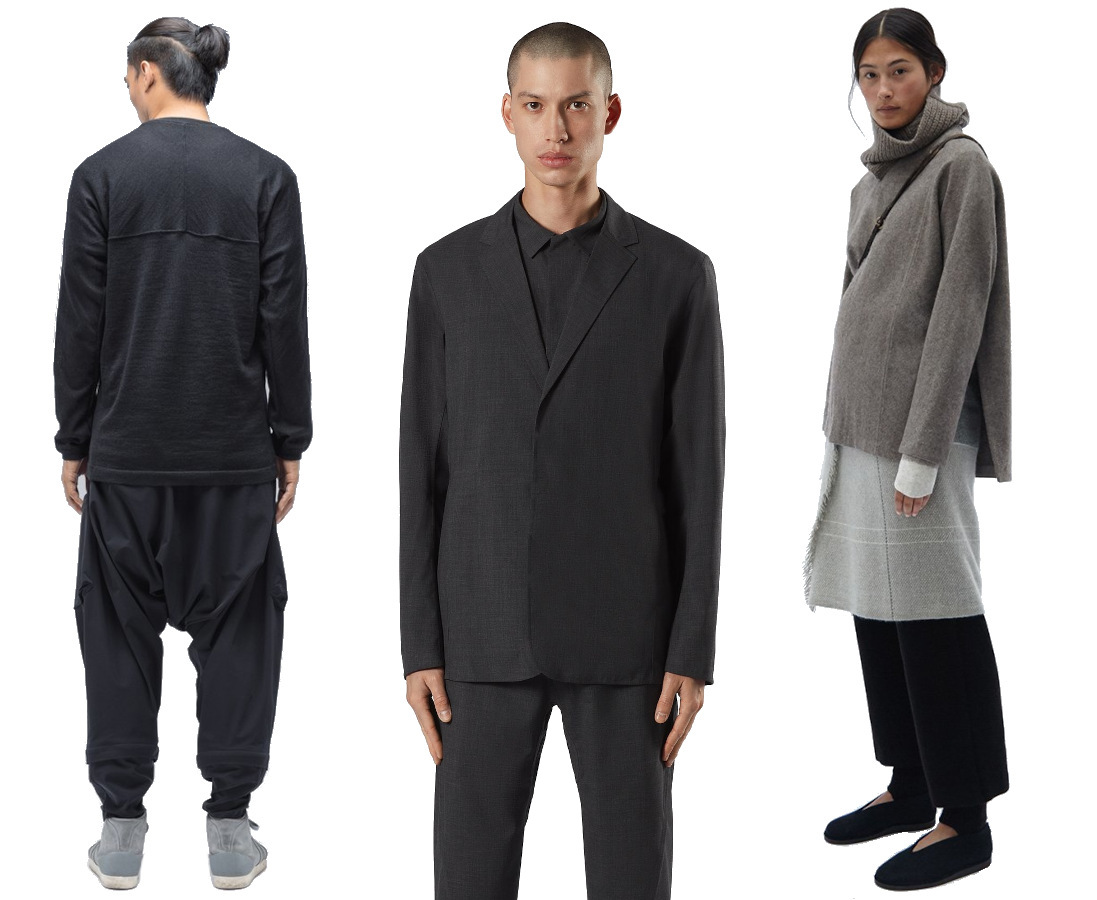 High-tech synthetics are great. Still, wool often outclasses them. ev_w_ guides you to the properties and use cases of high-performance wool.

The term “performance wear” might call to mind nylon and polyester, synthetic fabrics that humans created to stand up to weather and resist the wear and tear of outdoor activities. But before there were synthetic fabrics, humankind made do with natural fibers from animal hair and hide (wool from sheep, leather from cows, for example), plant stalks and seeds (linen and cotton), and worm excrement (silk).

Today, natural fibers are usually associated with comfort and particular temperature considerations. Wool, especially the less scratchy merino variety, calls to mind winter warmth and pillowy softness, though its breathability also makes it a solid choice for summer wear. Plant fiber-based fabrics like cotton and linen are often used in basics for hot climates because of their lighter weight, breathability and softness. Cotton in particular is an abundant, relatively durable, and very cheap material, woven into 60-75% of all clothing produced globally. Silk is soft, breathable, lightweight and warm; a fixture in luxury and thermal underwear production though quite fragile. However, many of these fabrics, including modern synthetics, absorb and retain the odor of sweat — not what any active wearer wants.

Though synthetics are catching up with the addition of antibacterial zinc and silver, wool excels above the rest of today’s fabrics when it comes to odor resistance. A popular theory is that the antibacterial properties of lanolin, a compound secreted by a sheep’s skin to deter skin diseases, is behind wool’s success; however, a lot of lanolin may be lost when wool is cleaned for human use. Based on the available science, the secret doesn’t seem to be chemical so much as physical: Instead of a secret ingredient, the structure of wool fibers both individually and together keeps stink at bay.

Wool fibers are curly and crimped, built like springs that refuse to lie smoothly together. This structure creates pockets of air inside and between fibers, and tiny pores on their surface let moisture pass in and out. While the crimping can make wool scratchy, the air flow among pockets and through pores wicks sweat away from skin bacteria, which cause odor by feeding on sweat. When they don’t get their lunch, we don’t get their stink.

This wicking effect can be amplified by yarn and knitting engineering, exemplified through 3D knits, which can introduce a greater quantity of air into a fabric. With this enhanced hygroscopicity, wool doesn’t need to be washed as often as other fabrics — it might be enough to simply air it out overnight. My boyfriend insisted on testing such claims by wearing a merino t-shirt for ten days straight, and I can confirm there was no smell during this period. (I have since bought my own.)

This is an obvious selling point for travelers and hikers with limited access to washing machines or those that are simply lazy; but it is also an important consideration for the mitigation of environmental damage. Laundry not only contributes to carbon emissions but causes synthetic material to release microplastics into oceans, rivers and lakes. These microplastics are highly toxic when they are broken down, creating charged particles small enough to be absorbed by marine life as well as human skin and brains. As animal hair, wool biodegrades into nontoxic and naturally recyclable proteins, making it a far more sustainable fabric choice. Unfortunately, this also means it requires its own washing process, with special detergent and separate from “everything else,” to properly care for the material.

Less washing also makes clothing last for longer, and the structure of wool gives it extra longevity. While wool might not be as resistant to abrasion like some synthetics, the springy, crimped fibers make it resistant to the sagging that can make synthetic and other natural materials look worn, as well as dust, static and wrinkling. Like most wool sweater owners, I have my own legend of a decades-old knit soldier that illustrates exactly how many years of wear one can expect from such an item.

In 2009, I moved from southern California to New York City and inherited a thick turtleneck from my mom. She had bought it in the early 1980s for snowsports; there were some holes from where moths had tried their luck since she had moved to warmer climes, but the knit of wool garments makes them easy to mend. The crimping and curl of the fibers tends to smooth over any battle scars, even those from teenagers inexperienced with a needle and thread. After patching it up, I wore the sweater to class, work, the mountains, clubs, and right through 2019, when yet another international move forced a particularly unsparing closet purge. By this time, the sweater had been worn by two generations in my family over the course of almost 40 years. And with plenty of miles still on it, I donated it to those in greater need.

Wool is known for its warmth in the colder seasons, but merino wool has become one of my year-round staples. Grown by the eponymous breed of sheep, the fineness of merino makes it an attractive choice of fabric for performance wear because it is lightweight and retains the sweat-wicking quality of wool to meet a range of temperature needs. A popular misconception is that wool turns up the heat in warmer climates; while this may be a matter of personal taste, I have experienced the opposite because of merino’s breathability. Air pockets of wool can insulate the wearer from cold, but through yarn and knit engineering, they can be adapted to decrease insulation and increase air flow.

The diameter of the yarn and density of the knit will determine its thermoregulatory effect, as well as its itchiness. Thicker fibers and higher densities will support insulation, while finer hairs and looser knits support breathability. For merino in particular, knit varies significantly to meet a variety of purposes, though they might look the same on a product page; density is sometimes specified on the product page to help a potential buyer find the one that best suits his or her purpose. Icebreaker in particular displays quite a range of “grams per square meter.”

As for itching, the threshold is when at least 5% of a yarn’s composite fibers are over 30 microns in diameter, as coarse wool approximately measures; at less than 25 microns, merino is unlikely to irritate the wearer. In the burgeoning market of merino t-shirts, where itch and breathability are primary concerns, many are composed of blends with other materials. This may increase the itch factor, as illustrated by any side-by-side comparison of a polyester blend sweater with one of 100% merino wool.

Knit is also an important consideration, as open weaves may feel more coarse and trap and torque body hair in irritating ways. Veilance’s staple tees, the Frame and the Cevian, offer points for comparison. The Frame t-shirt is made with 16.5 micron merino, 13% nylon and a smooth knit — indeed it is the softest of its kind that I have felt — while the Cevian tee, with 46% merino and a more open knit, is rougher in feel and itchy to some.

Tees and long sleeves made of 100% merino are available from brands like Outlier and Nexural, as well as various mainstream retailers like COS. While “quality” as measured through softness and knit robusticity does seem to correlate directly with price, I have been shy about ordering top-tier 100% merino garments for fear of moths, which are deterred by blends but not many of the cedar blocks I have installed in my drawers over the years. Of the 100% merino items I have ordered (all roughly even in price), my “performance” tops from Ice Breaker and Dilling are scratchier but far more amenable to repair than those from COS, which have a more fragile knit that scars easily. 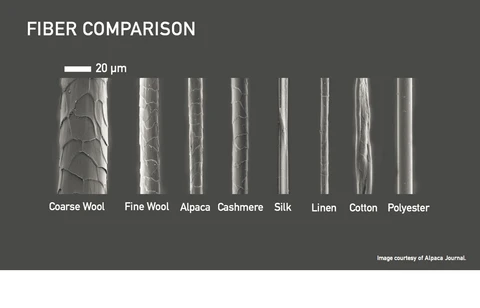 Undercoat hair such as cashmere from goats is prized for its fineness and accompanying softness, though its more limited production tends to make it pricey. Hair from the undercoat of Angora rabbits is particularly fine, ranging in diameter from 10 to 15 microns, and cashmere is similar to merino’s thickness at 18 microns. Like mohair, wool is generally a mix of top- and undercoat hair, though wool from the first shearing (lambswool) is understood to be the finest available from sheep. In general, finer hairs and wools are more fragile, and this is exacerbated when they get wet — even thicker wool loses up to 25% of its strength in these conditions. With such a broad range of quality available, each kind of wool and hair might be suited for a specific purpose; all things considered, merino might be Goldilocks’ choice.

All for Wool and Wool for All

If wool seems a bit too warm and fuzzy, hardcore techwear enthusiasts might be interested to know that animal hair boasts a few more extreme technical properties. Like all hair, wool fibers are coated in a waxy substance known as the cuticle to protect them from damage, and its hydrophobicity repels water like rain and drinks that might stain. The interior of wool fibers is rich in water as well as nitrogen, which makes them naturally fire retardant — they won’t catch fire until 570-600°C. Wool even has some UV-blocking properties, which can be bolstered with further treatment by manufacturers.

While I’ve mostly been an office rat that rarely sees the sun let alone incendiary situations, wool has been my favorite material over the years for its versatility in thermoregulation, protection from spills, smell management and multiyear service. Like much of techwear, it isn’t necessarily cheap but products are available at a range of price points for a variety of purposes; you get what you pay for in a wool garment. Importantly, wool represents an investment in not only material quality but sustainability by virtue of its longevity, renewability, biodegradability and nontoxicity. In an age when environmental health is top of mind for Earth’s residents, this age-old material may well be one of the keys to the future of modern clothing.

The image at the top of this article features a llama wool sweater from Acronym, a merino wool suit from Veilance and a Yak wool cape from Norlha. 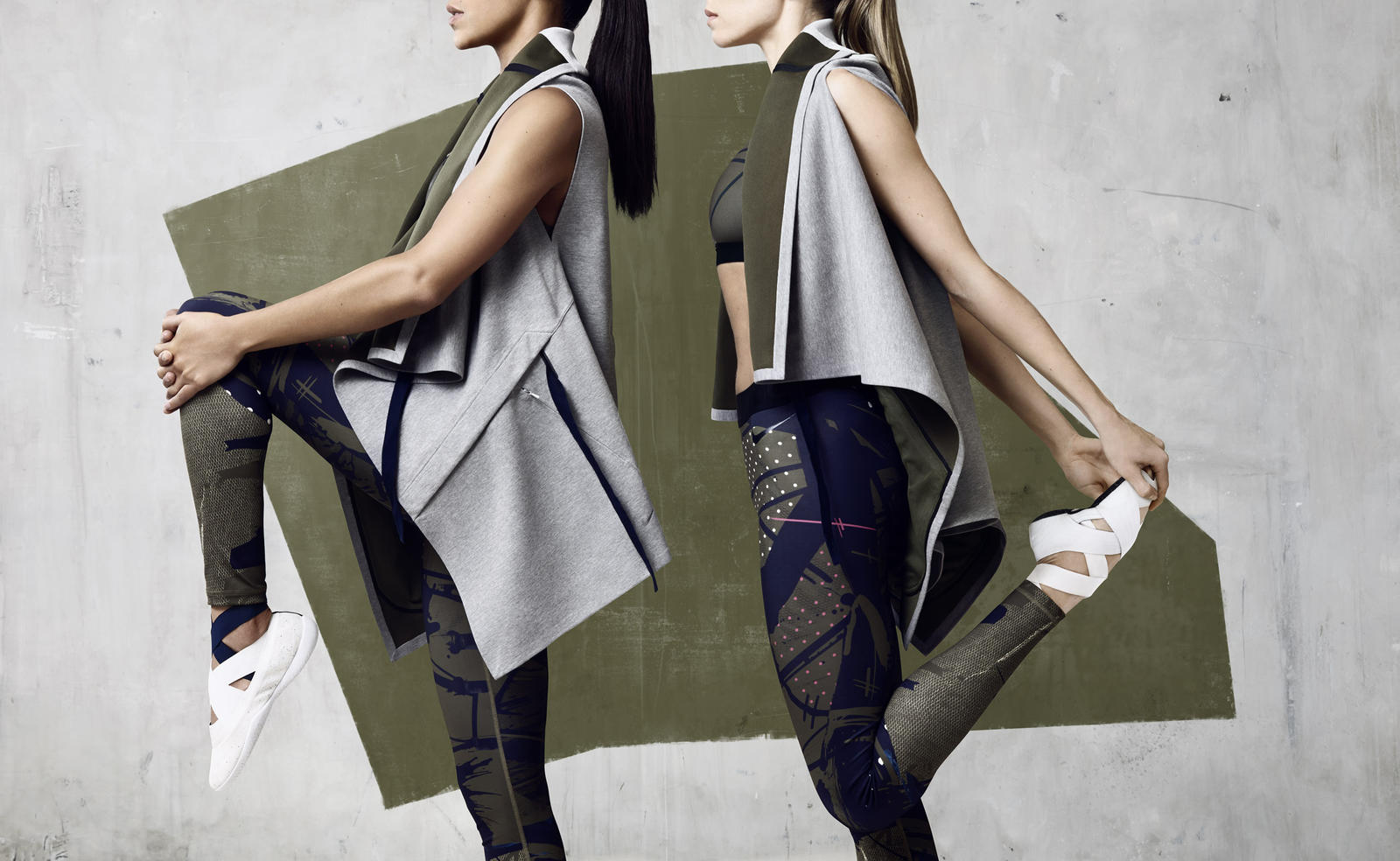 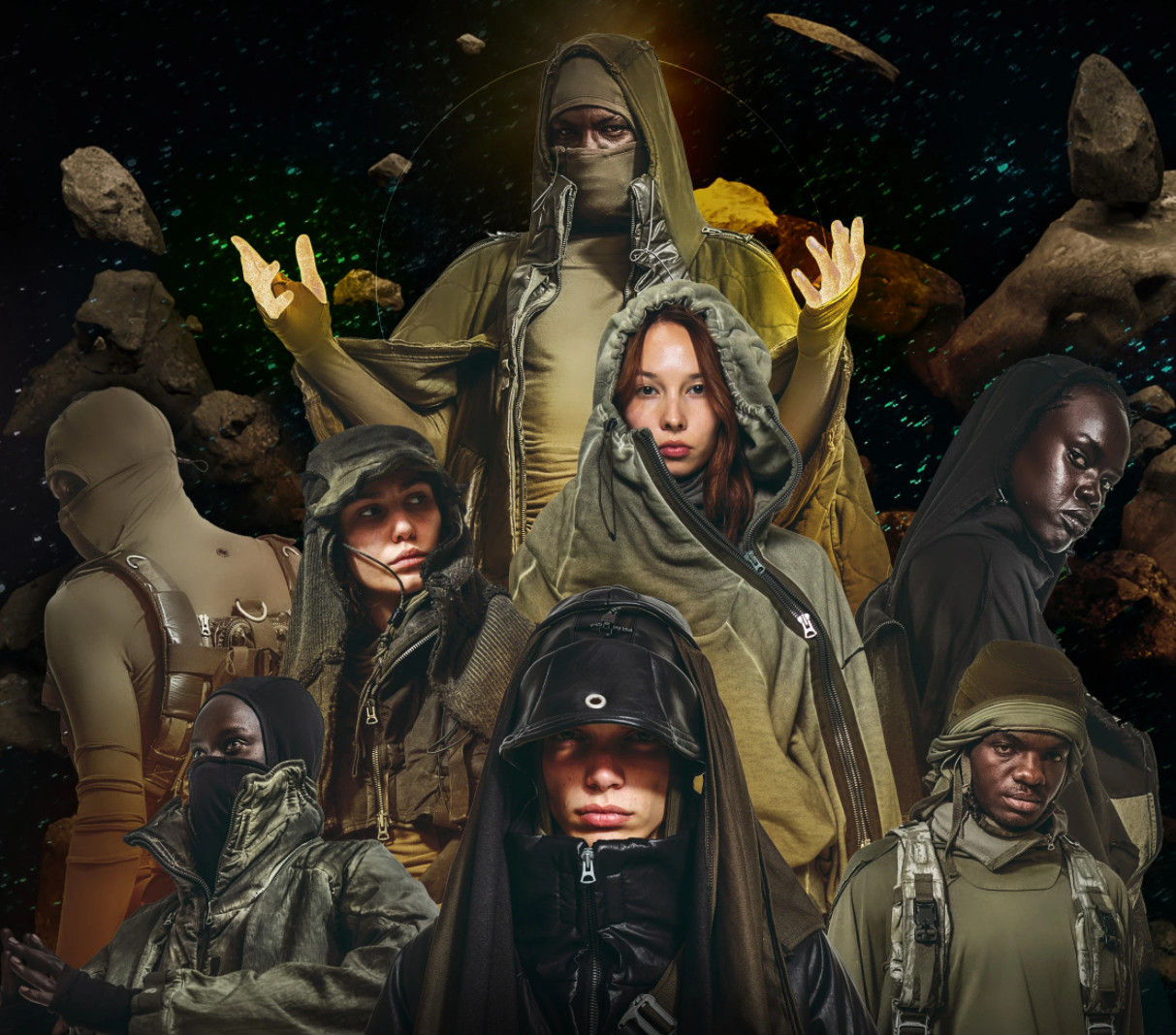 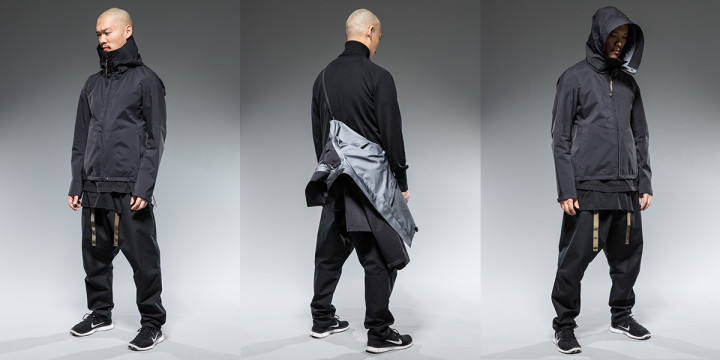